Featuring a base based on Stardust Speedway (They say, but it looks more like Collision Chaos mixed with Quartz Quadrant to me.. but i think that's cause the colours aren't quite right for Stardust Speedway.. even Act 3), the statue is by Goran Sadojevich, who did the Super Sonic one and the mini-figures) and features a pose inspirered by Sonic and Metal's Race from Sonic CD. Exclusive version features his Eyes, Chest and Back engine lighting up as well as the Base which has transparent light up sparks like the Super Sonic one.

Here are a couple of images.. More on the F4F Website at:
www.First4Figures.com 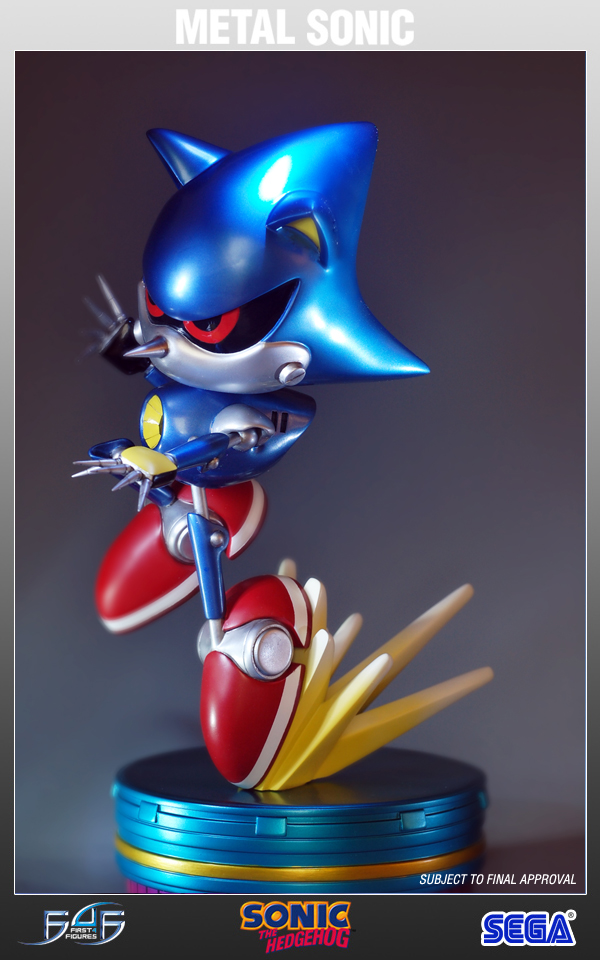 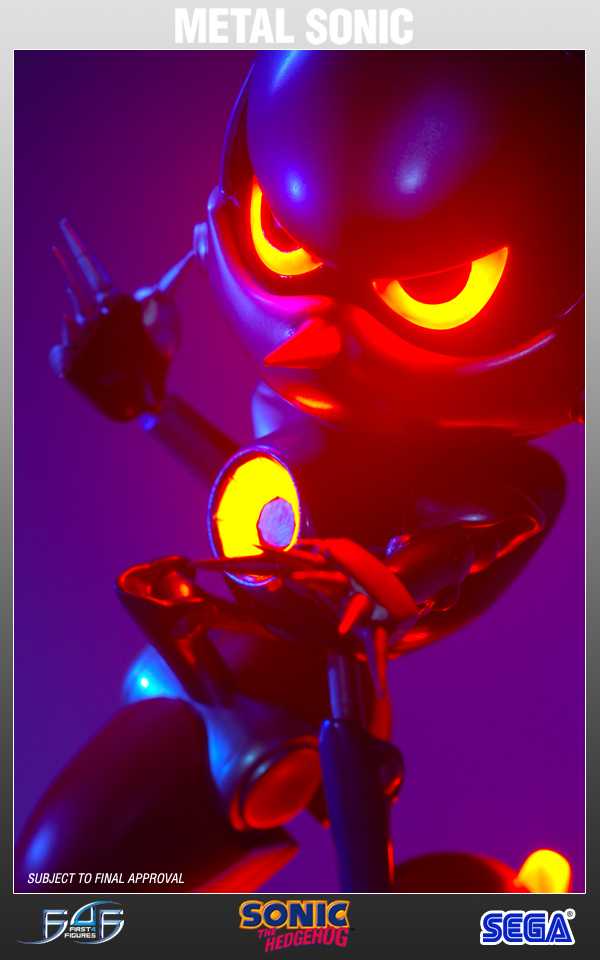 Posted on 28 Dec 2010 by Manic Man
I will Crush You?
printable version
While he is known for not being able to talk (apart from one line and a few beeps) First4Figures have shown the teaser for the 3rd Statue... Metal Sonic!

It looks like it will come with two version, the regular and exlusive one (with lights) and pre-ordering starts 28th December.. I'll post some images when they show more then just the teaser.. Since Super Sonic doesn't come out until January and this gap being much shorter then the last, i guess the Sonic Range is selling pretty well now.. Very good to know that..

Visit there site at www.First4Figures.com
Count of comments: 0

Posted on 24 Dec 2010 by Manic Man
SatAM Series 3 Figures
printable version
Right now.. lets see, Series 3 of SatAM Figures.. I'm going to be a bit nicer here while still keeping the idea true.. Series three figures would probably be around 1995 so there is a bit more chance of Female figures, which I'm going to give for this So.. Lets take a look:

Posted on 21 Dec 2010 by Manic Man
Little bit of Comic work
printable version
I've added two more Characters to the STC Character Database well.. one of them is a group ^_^, I've also touched up Sol Funic's Bio and added character lists to STC up to issue 38 now. Still along way to go, but it's getting there ^_^
Count of comments: 0

Posted on 18 Dec 2010 by Manic Man
Updated Comics
printable version
Well.. I've tweeked the Comics display so now, it lists all the comics in two rows, instead of one (so that's better) and there is a div bar for the titles of each story, so it's much easier to see and note how many and what stories are in what issue. And that's about it for this bit..
Count of comments: 0

Posted on 16 Dec 2010 by Manic Man
Sonic Der Comic - Card Set 1
printable version
Back in August of 1995, Sonic Der comic issue 14 came out in germany.. It was the only issue to feature NO Sonic Story at all.. which is a real stupid thing but oh well. What it did have, however, was four Cards (on one sheet you needed to cut out) giving a picture and some information on of Sonic's enemies.. Well.. to cut the story short.. the cards aren't up to much. The german in Sonic Der Comic wasn't great but its better on this cards, however, that doesn't mean that have much worth saying. I've taken me a bit of time and messing about (sorry, the Last one is probebly the WORSE translation job of the bunch cause it didn't seam to make any sense at that start ¬_¬) but i have not uploaded scans of the Front and Backs of each card PLUS an English translation version of each one. That makes 8 files if you couldn't work that bit out..

The 4 great Villians? Grimmer (who's really a side-kick, art by Richard Elson from STC 21 by the way), Badniks (Bunch of Sidekicks, art by Carl Flint from STC 12), Kid Cruel (One off villian but atlest a Villian ^_^, art by Mike Hadley from STPM 3) and Dr Ivo Robotnik himself (Of course, art by.. I'm not sure.. it's a SatAM Press Shot for some reason).

Images are in the Gallery in a new folder called 'Free Gifts'.. I'll use this folder in the future for good scans of free gifts like this (I need to add the Sonic Der Comic gifts to the Online database too for that matter). Hope you enjoy the work it took to scan, clean, edit, translate, edit again etc.
Count of comments: 0

Posted on 16 Dec 2010 by Manic Man
Christmas Card time
printable version
Well.. It might be a little late.. i can't remember.. and sorry it's another rush job but this years TESP christmas card is out now in the Christmas Card Section.. Featuring a nice little Animation between Amy Rose and Sonic.

Posted on 12 Dec 2010 by Manic Man
Comic Update
printable version
I've uploaded Sonic the Poster Mag issue 3's story 'The Kid Cruel Caper'. I'm not sure who the scanner was, which means it's a bit of a bad scan i've cleaned up.. Not really bad scan but worse then what i like..

Anyway.. It's in three places, not the normal two this time.. Poster Mag issue 3's link, a link from the reprint version from the 1995 Summer Special and the PDF Archive. Hope you enjoy the Kid Cruel Caper, Featuring the writing of Nigel Kitching and the art of Mike Hadley.
Count of comments: 0

Posted on 01 Dec 2010 by Manic Man
Small stuff
printable version
I've done a bit of an update to the system used in the animation section, so it now cuts down on the number of files need to be loaded and relies more on a single PHP file (it was mostly like that, but i also worked on some new code to speed things up, which i should have worked on long ago.. it's simple ¬_¬ either way, its now faster and stuff) and.. well.. i've done a little tweak to the main page frame.. i'll do a bit more but.. does that Menu seam to load a bit faster for some of you? I think it does.. which means, what i tried works well.. so i'll work more on it ^_^ Speed a few more things up

For people in the UK: It's Plain White out site my window and very little is moving.. light snow all day so far too..
Count of comments: 0

Posted on 01 Dec 2010 by Manic Man
A Important Message to anyone i know
printable version
I have just found my e-mail has been hacked by a new-ish spam scram... if you have gotten an e-mail from me that is spam.. I am currently dealing with it.. Sorry.
Count of comments: 0