RIP Christine Cvanaugh
printable version
Christine Cavanaugh, Voice Actor of Bunnie Rabbot in SatAM, has died age 51. She died on the 22nd December (Family comfirmed on the 30th) While at home. No cause release.
She won a few awards for her various roles between 1988 and 2001, until she retired and return home, citing a desire to spend more time with her family.

A shame that the first new news here in some time is this but things go like that.

Posted on 31 Dec 2014 by Manic Man
More Flint Artwork
printable version
Some more Artwork by Carl Flint is up for sale from him: 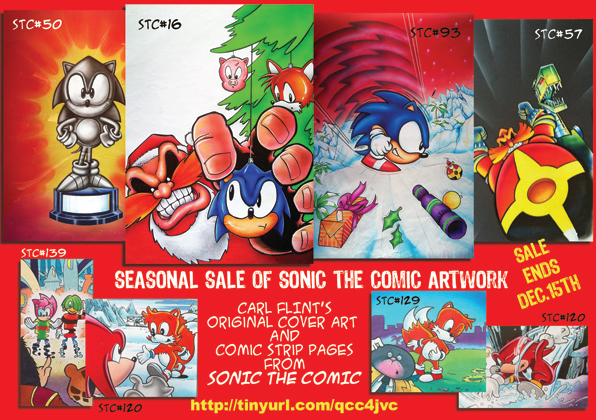 Good works again by him, money goes direct to the artist, not a third party seller.

Posted on 08 Dec 2013 by Manic Man
Search Fix
printable version
Mmm.. Long Time no work visible..
either way, Fixed the Search.. It now works again. Sorry for taking so long on it.
Count of comments: 0

Posted on 19 Aug 2013 by Manic Man
Carl Flint Art for Sale
printable version
I had this nice e-mail from Carl Flint, Great artist from STC for.. most of it's run (First STC credit was the Cover of issue 6, last was a story in issue 147) and.. well.. I'll just show this to you guys: 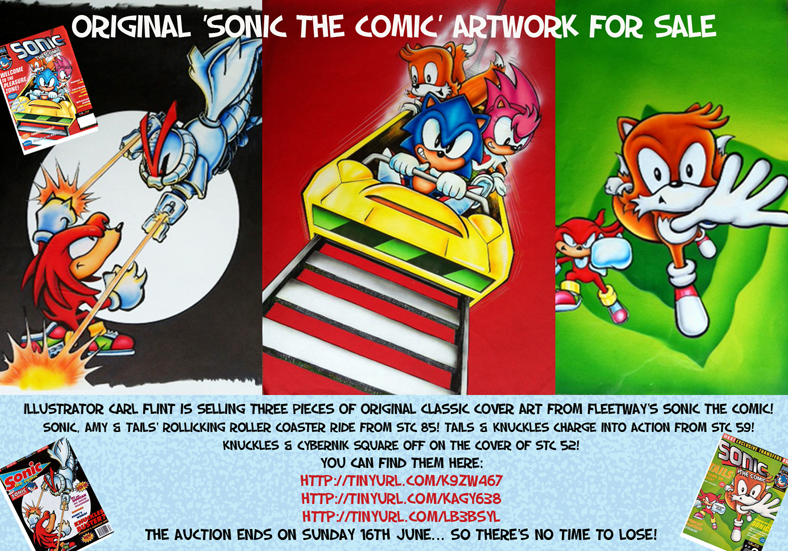 All nice works and money goes direct to the artist, not a third party seller, so very much worth it.
Count of comments: 4

Posted on 07 Jun 2013 by Manic Man
New Note
printable version
Yes, I know I haven't been VERY active here.. too many things going on that distract and are of more importance these days.. but any way..

Added a New Note to Sonic 1 for the MegaDrive, featuring newly discovered Credits with a Translation. Also minor updates to the credits page..
Count of comments: 0

Posted on 08 Mar 2013 by Manic Man
F4F Tails
printable version
First 4 Figures have dispatched the Tails Statue. I still have images of the disappointing Knuckles one to come and I'll do some images of that Tails one.. and with luck, get some more of this site updated when it's a good time.
Count of comments: 0

Posted on 23 Jan 2013 by Manic Man
F4F Knuckles
printable version
The First 4 Figures Knuckles and Knuckles excluvie statues are being dispatched shortly. If you have Pre-ordered them, expert the money to come out soon.
Count of comments: 0

He was an actor that was in alot of things over his carear, from 1950 till he retired in 2006. He will probebly mostly be remembed for his award winning role of Dr. Seth Hazlitt, a major recurring character in 'Murder, She Wrote" and to Sonic fans as Sir Charles 'Uncle Chuck' Hedgehog in Both Series of SatAM.
Count of comments: 0

Posted on 20 Aug 2012 by Manic Man
Unseen Sonic
printable version
Over at his Blog, Lew Stringer, Writer of quite a lot of STC Sonic Storys, as well as alot of Other items (Currently writing and drawing for Beano, Dandy, Toxic and Viz) has posted two Pages of artwork he did as a Sample for a job as an artist on Sonic the Comic (STC - Fleetway). He was turned down as a Artist, but got the job as a writer. Never the less, The two pages aren't bad. More information and the two pages in question can be viewed at his blog "Blimey! It's another blog about Comics!" by clicking here:
Lewstringer.Blogspot.co.uk. The Blog is also of interest for alot of information and articles on Classic British comics and some modern stuff too. Well worth a Visit.

Posted on 26 Apr 2012 by Manic Man
Death of Mike White
printable version
Lew Stringer has just reported the Death of UK artist Mike White. He worked on Sonic the Comic, doing the Golden Axe Stripes, as well as the Golden Axe Cover for issue 5, back in 1993. He then returned doing all the Stripes in the 1996 Knuckles Knock-Out Special.

He has had a fairly long career in UK Comics and i'll just link to Lew Stringers post on him, cause he can say more on him then i can.
Lew Stringers Blog -Mike White RIP
Count of comments: 0